Dumbarton Oaks, unlike many other institutions of its kind, is home to three, very different programs of study.  On their own, Byzantinists, Pre-Columbianists, and Garden & Landscape scholars would have no reason to interact, but at Dumbarton Oaks this is not the case.  By organizing communal lunches, teas, and social hours, a unique culture has developed that promotes interdisciplinary friendships and occasionally collaboration.

The institutional culture stems from the sherry hours and daily teas that Mildred Bliss would organize while she was still a presence in the house during the early decades of the institution.  Elizabeth Benson was employed at Dumbarton Oaks in the last years of Mrs. Bliss’s life.  She remembered how Mrs. Bliss organized daily tea —

She came over for tea almost every day, not absolutely, but usually. Tea was served every afternoon at Dumbarton Oaks in the good old days in the hall of the old house in the round part that looks out over the garden—in the hallway, the center of the hallway opposite the main front door. And she would very often come for tea and sit down at the tea table where the urn was. We poured our own tea but she was sitting there…. And it was a good chatting time for people; that was a good social time.

Sherry was also a large part of the early Dumbarton Oaks culture.  Many former Fellows remember gathering weekday afternoons for sherry.  Ioli Kalavrezou remembered one humorous anecdote about the practice —

We also had sherry Tuesdays. Every Tuesday we had sherry before lunch. So it meant that the Tuesday afternoons were probably not the most productive ones for the Junior Fellows.  We took walks, usually on Tuesdays, down to M Street and up again, you know, just to wear off the sherry – a little bit.

In a place focused on research and introspective work, these social events sponsored by the institute’s patroness injected greater contact between researchers and helped to build closer friendships and working relationships.  Of course, as time went on daily tea and sherry became outdated and less common until they were eliminated in the mid-1970s.  With this turn, lunches

became the new way for individuals from different fields to interact with each other. Lunches, originally had been formal sit-down meals complete with servants. Director Giles Constable changed this and made lunches more inclusive and open to the whole Dumbarton Oaks community.  Stephen Zwirn noted how lunch, at which attendance was required, harkened back to the ideas the Blisses created for collaboration between the disciplines —

I think that was one of the ideals of the Blisses, to bring together scholars from different fields and help each other or discover ways of thinking about different things, you know, from different angles. I think that’s something that’s inevitable, since we all learn how to do our work from traditions in different fields…. I myself have benefited from people in the Gardens section and the pre-Columbian section, when areas of interest or research have overlapped, you know – whether it’s the presentation of status or narrative or the use of certain materials – you can really get the ball rolling in terms of exchanging information.

Betsy Rosasco, former Junior Fellow, had a similar experience with the dining scene — 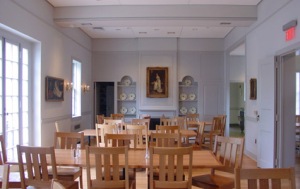 At lunch wherever you sat there was going to be something interesting going on. It was almost hard to choose. You’d get a table of Byzantine scholars and pre-Columbian scholars and I’d be listening to them talk about the tree of life and the symbolism in their respective cultures…. We just always found things where we could learn from each other and compare notes. To me…it was a godsend to have all these people from totally different backgrounds.

The same holds true currently.  The sense of congeniality that is fostered over lunch extends into other aspects of work at Dumbarton Oaks and is one feature that makes it truly unique. More than just establishing a connection between fields, lunch also is a bridge between generations of scholars where Fellows can impart casual wisdom on Junior Fellows, and the occasional undergraduate student or intern can gain out-of-the-classroom knowledge from some of the most preeminent minds in the field.  While the actual meal has changed greatly from its original form when the Blisses were still alive, the spirit is still the same and leaves a lasting impact on all those who have spent time at Dumbarton Oaks.